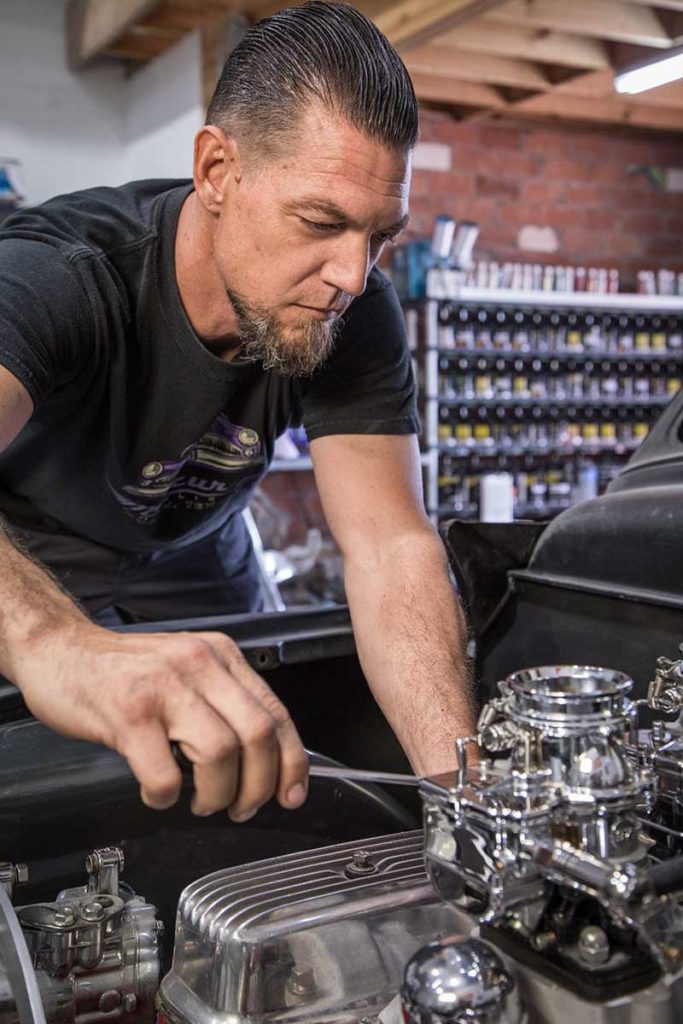 Tim’s first hot rod was a ’28 Ford Model A Coupe. It ran a ’73 454 that was donated from his granddad’s GMC truck, had inverted headers, and was guided by a steering wheel passed down from his great-granddad’s Model T.

Its paint job was applied by none other than Tim’s brother with an assist from their nephew. There it is again. That family connection.

Family is a common theme at Mercury Charlie’s, and a big reason why everyone gets along so well. Everyone’s here for the same exact reason. The same love. The same deep respect for tradition and appreciation for jalopies, hop ups and cruisers. A love of traditional hot rods and period-correct custom cars courses through the entire crew’s veins.

Everyone at Mercury Charlie’s is here for a reason. To make good old cars into great old cars. Which brings us back to Tim.

Tim Monroe functions as the shop foreman. Which means he’s no stranger to sorting out little problems before they become the kind of overblown build-show-sized problems you see on Fast N’ Loud and other shows that live nowhere near the zip code of reality. If Tim had his druthers, those shows would cut the crap and help folks realize what it really takes to build reliable vintage cars.

To that point, Tim’s daily is a 1950 shoebox Ford, so he understands how to keep an old friend on the road. He prides himself keeping his customer’s cars running, stopping and keeping their cool. Simply put, he’s the kind of guy you want wrenching on your ride.

Is your period-custom or hot rod throwing tantrums and acting all irritable? Got a squeak, rattle, or weird pull? Bring it to Tim and he’ll sort it out. Stop by anytime and take a look at his handiwork. Hell, take a look at his hands. Stare him straight in the eye. Yep, this guy is solid as a rock and honest as the day is long.

Is it possible for a car have a guardian angel? Well, as a matter of fact, it is.